First run after a week off. Essentially being at sea level did wonders for my speed. The calculated average pace may not totally reflect that, but I was stumbling around twisting farm roads which often lead to nowhere or onto someone's farm, so there was a lot of "navigational" pauses. Pretty cool area to run around nonetheless.

Going into Italy I had only one plan set in stone regarding running: something mind blowing in the Alps/Dolomites. Prior to arriving in Cortina I had only ran once over the last 10 days: an exploratory run meandering over rolling farm roads in Tuscany for a fun 10 miles of sightseeing. Three days later, emerging from a tunnel the scene was immediately set for an extraordinary adventure.
The Alps are starkly different from the Rockies in three ways: steep, green and culturally. Ridge lines of pointed teeth pierce the clouds while merciless near vertical faces stare down at the relatively insignificant creatures below. Trees and alpine meadows prosper at the comparatively lower elevations. Lastly, the entire landscape is sculpted by a very different history. A well maintained network of trails, refuges and well signed junctions defines the Alps. A long history of sustained living distinguishes this area from the miners and commercial ski industry which have (or had) a hold in Colorado. A quick 6 mile jaunt the first night was tantalizing - I needed more!
Andrea, his girlfriend and I set out bright and early...or scratch that. We feasted like kings on the wallet burning inn's breakfast which we had already paid for. Not to waste a penny, I had croissants, donuts, rolls, juices, cheeses and meats. I mean you can't not! We got to the trailhead at ~10. The view from the car:
After picking my jaw up off of the ground we set out as a group of three casually walking a half mile before Andrea and I broke off. The run began with brutally steep, yet groomed and runnable switchbacks for a few miles gaining just a bit under 1,000 feet. Subsequently, we found at ourselves at the first lake of the day. 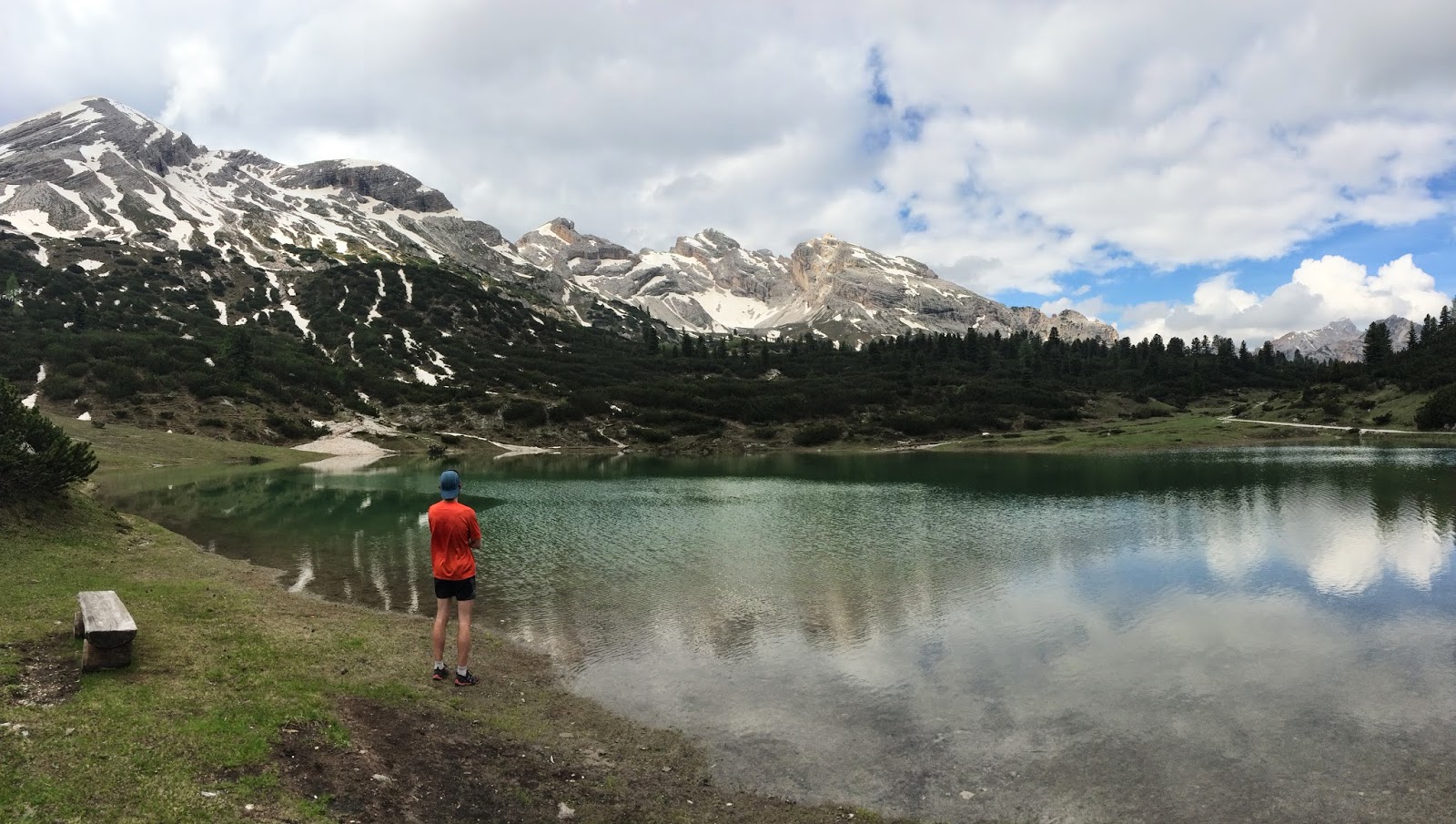 The following 3 miles contained dispersed though frequent uphills. We were able to run near everything but we didn't hesitate to slow down when we needed to. The trail eventually brought us to our primary objective for the day:  Refugio Biella.
It didn't take long for our eyes and thoughts to drift over to the nearby summit which according to the map is "Croda del Becco Seekofel". "That actually doesn't look too bad at all, let's do that real quick" we decided. Perhaps arrogantly I thought I could power myself to the top in a few minutes without any extensive effort. It didn't take long for me to eat my words. The summit was much further away than we expected and at least for us, too steep to run for the majority. Still, our new objective would not be set aside.
It's moments like this where I know that had I turned around it would have weighed upon me heavily until I made it back - which in this case was likely never. We pressed on. Some steep trails and residual snow later we found ourselves atop a "mom-worrying" cliff. I would estimate it was 3,000 feet down myself. It was capped by cornice which appeared days from collapsing. Views fulfilled my goal: mind-blowing.
The cliff amounted to be the biggest thrill of the climb as the true summit was a mound distanced from any geological wonder. I ate my American Cliffbar and Andrea ate his honey, raspberry jam and bread rolls, really. When small snow flakes began swirling in the wind, we figured we should get going before our shorts and T-shirts got the best of us.
Descending I realized how worn my shoes are. I might as well have worn Tom's or even socks. If you want to know what every sharp rock on that trail feels like, contact my poor feet. We met his girlfriend at the refuge at the base of the climb. They hiked for a bit as I ran down ahead and climbed up a grassy slope which ended up being a rocky face instead. Typical. By the time I was back down Andrea caught back up and we jogged back down some steep (noticing a trend) steps passing a few beautiful, crystal clear lakes.
Back on the main trail, Andrea meandered up a bit to meet his lady and I went off on another spur to add some more miles and vert. The steepness of the Alps are unforgiving on legs that are already at 4,500ft on the day. It was all I had to get to 5,400ft before turning around as rain began to fall. Opened up the downhill hard until I rejoined the crew and we finished together, just as we began the day.

Two days later, we are nestled in a small house in the range. Arriving at dusk, silhouettes mask the true form of the mountains on the horizon. Sunrise brings with it the realization of how prominent these peaks stand themselves, though in a completely different climate from Boulder or the Alps. The ground is saturated with water and undergrowth blanketed by a canopy of trees until timberline.

A morning study of the map, a quick breakfast of honey and bread, and Andrea and I are jogging down the kilometer of road before the trail begins. I'm quick to learn from Andrea and discover for myself that this is a less popular national park and this receives minimal funding for trail maintenance. A mess of fallen trees litters the first 10 feet of the trail and not long after we are carefully crossing a steep gravel slope where the trail had collapsed down to the gorge some 40 feet below. Weary from days past we avoid stops in fear that we may realize we are too tired. In any event we ended up feeling rejuvenated by the movement rather than drained by it. Perhaps 100 muddy, scarcely marked and steep switchbacks later we emerge out of the trees for our first glimpse back at the castella de San Vincenzo reservoir 3,000ft below us at which we started.
Above stretches a grassy ridge line which appeared to be one of the "way bigger than it looks" or actually not too bad. For probably the first time ever, it actually wasn't too bad. At this point the trail was no more, so we trudged up the wet grassy slope. Summited in 2:20. We ran next to nothing going up as it is pretty steep, but it is certainly possible to run most of this route. Still 4,800ft is a long time to push hard.
Some darker looking clouds were gathering around nearby peaks so we didn't linger on the summit. Andrea began his descent as I quickly scampered across to a cairned sub-peak  and thereafter began my own trip back down. The steep slick grass provided little purchase, especially now considering a down word momentum. I caught back up at tree line and we bushwhacked our way through nettles and thorns to the faint trail leading back to the valley. What took eons previously we were able to zip down while carefully leaping and juking over and around nature’s arms reaching across the trail.
Andrea toyed with switching from a heel to forefoot strike and was greeted with the excruciating lower calf soreness which accompanies the switch. Returning to pavement, we elected to run directly into the lake. It wasn't necessarily hot (though it was humid); the day's efforts were washed away in the cool blue water.
Posted by Unknown at 3:01 AM