Another weekend another day in the hills. I've still been taking it relatively easy, I biked all of Flagstaff road on Tuesday. For anyone who has read Running with the Buffalos, I really can't imagine running under Mark Wetmore (who I coincidentally saw outside his house last week) and having to bike home up that hill every day. I also finally scrambled the East Face of the Third Flatiron on Thursday. Its super mellow until the last 30 feet or so where it thins out dramatically. The hardest part was far and away the awkward and exposed 200ft downclimb off the back. If the Third had the downclimb of the First it would be perfect. Anyways.

Andrea and I had been trying to connect for a while without success for a month or so and we finally found a time on Saturday. We decided on doing a loop of Audubon, Paiute, Toll, and Pawnee in the Indian Peaks. The road is now closed to cars, so we parked at the winter lot and rode bikes in. I should really do this in the summer, it saves $9 and its a nice warm-up and ride by itself. We parked the bikes on the West side of the lake and started off on foot towards the Mitchell Lake trailhead. As we were going from bike mode to feet mode I was going to put my iPhone in Andreas pack as it has a small, easily-accessible, zippered pocket but for some arbitrary reason I didn't, remember this.
We ended up at the Long Lake trailhead instead, so after finding an old trail spur heading North towards Mt. Audubon we took it. Eventually the trail disappeared and we were just romping over fallen trees, dodging marshes and hopping over streams. We popped out onto the Mitchell Lake trail some time later following it around to Mt Audubon's Southeast ridge. We hadn't necessarily planned on taking this route but our navigational error of going to Long Lake trail head instead of Mitchell Lake trail head put us right at the base. To gain the ridge, we started up a terribly loose talus field from the West side of Mitchell Lake. We were the only people there so we took parallel lines so as to not worry about kicking rocks into the other's face. I found a better line up a more solid rib, scrambled up a bit and grabbed my iPhone to take some pictures. 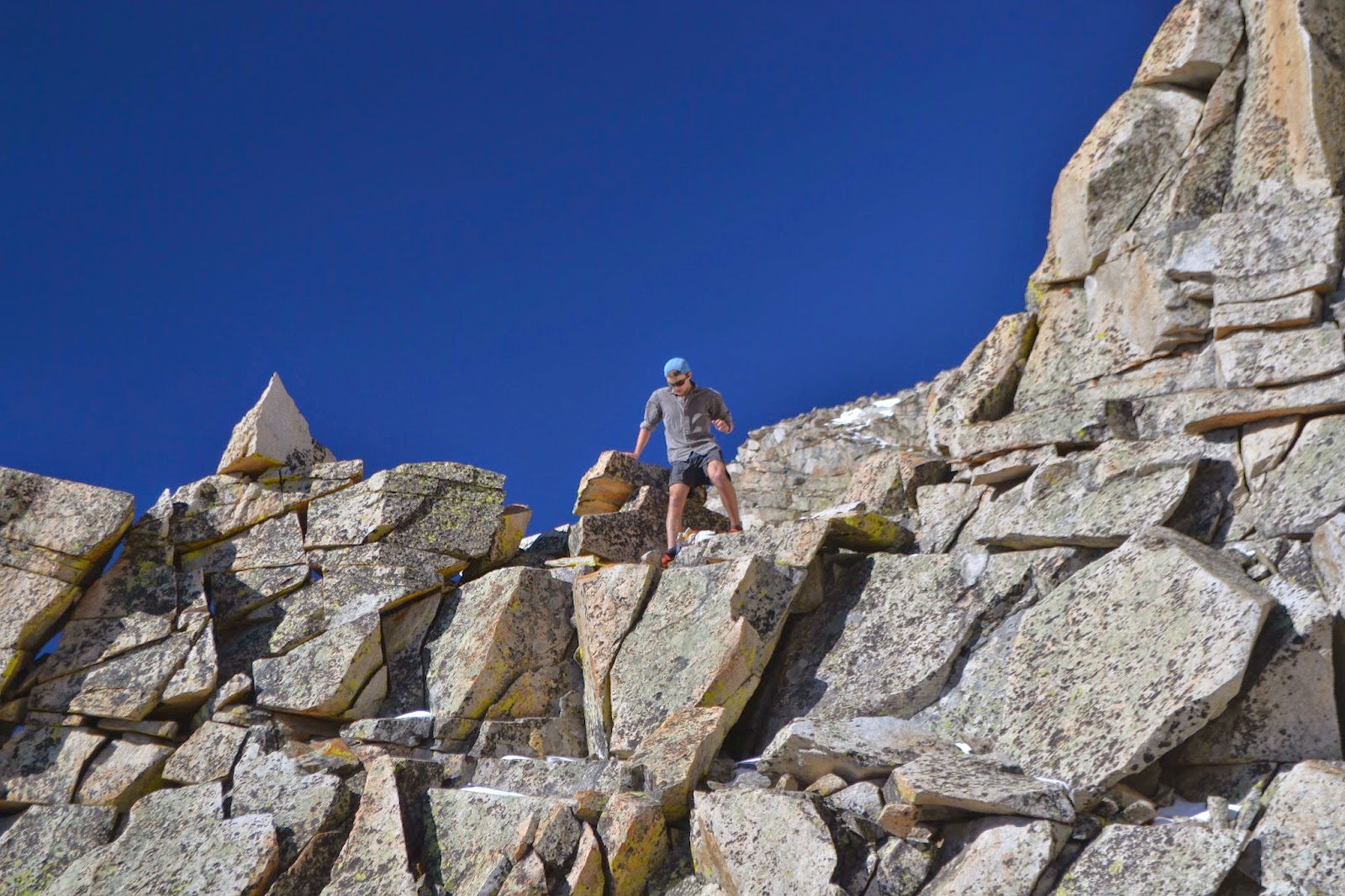 Except I didn't, because it had fallen out of my pack, because I didn't put in Andrea's zippered pocket. To find it would be nearly impossible because we had been completely off trail. I figured I'd rather at least go do the hike so as to not loose $500 and miss out on the glorious weather we were having. We gained the ridge and followed it up and up. I knew from prior reading that there was a notch and was able to drop off the ridge proper just in time.

There is a jutty shelf of rock on the South about 20ft below the ridge which provides a super exposed but easy ledge work around to downclimbing the notch itself. Some exposed moves going up the other side of the notch and we were marching up the last 800' of tundra to the summit of Mt Audubon.
We snapped some pictures then headed North towards Paiute. The ridge between the two peaks is a very fun traverse. Not hard at all, easy 3rd class moves, but with fantastic views and exposure. We met another group of guys on the summit of Paiute who also planned on doing Toll. The route I had taken in August on the North Face was now covered in drifted unconsolidated snow and ice. They had rope, ice axes and crampons for tackling the North ridge.
We started the traverse anyways, knowing there was an exit gully if we didn't feel good. We got about half way there and from our view it looked downright stupid to try. Sure, its possible we could have done it, but we had already lost an iPhone, we didn't need someone to die too!
The gully ended up being the highlight of the day. We were able to glissade about 8000' though not continuously. Really fun. From Blue lake we wove our way around some marshes and tried to retrace our steps in search of the phone. Predictably we were not able to find anything at all. So it is.
Good conversation, company, weather and terrain - it ended up being one of my favorite days in a long while (aside from the whole phone thing). We got back to Boulder and enjoyed some barbecue pork shoulder cooked in Andrea's brand new smoker.
For route info, it was about 5 round-trip miles of biking on road, 13 miles of foot travel, and about 4,000' of gain. Of note on the route are getting around the downclimb on Audubon's ridge and just as a comment, I would not do the descent we did from Paiute without snow. We spent about eight and a half hours including bike time.

I mapped my GPS track into a route and tried retracing it Sunday morning to where I knew it was lost with no success. It was still another good hike anyways. Given my iPhone is gone and is also my camera all of the pics are taken by Andrea.

May some woodland creature find my phone and send me and my friends hilarious pictures.
Posted by Unknown at 12:15 AM