Up and down from Shanahan Ridge Trailhead (glad I found the bus stop there). Should probably invest in some Kahtoola microspikes at some point (50% of the people I saw had them), but the traction wasn't too bad in my normal shoes. Finally got my South Boulder Peak summit. Nice views and cold hands:

Posted by Unknown at 2:25 PM No comments:

Woke up this morning to the first notable snow of the winter this morning and decided to hit up Chautauqua. Thought about going for Green, but I wasn't sure if my foot was ready for that kind of distance and vertical. I figured the 1st and 2nd Flatiron loop would be a good median. I haven't ran even a real hill in almost 3 months, so my legs felt as fresh as the snow on the ground. Snow was also nice because you can't go too fast on snowy/icy rock and it provides a good cushioning for the foot. I didn't push it too hard, I hiked and took pictures whenever I wanted. The run was awesome, I think this is actually the happiest I've ever been on run. It was just perfect. Would definitely recommend doing a snowy run like this to anyone who is interested. I'd say the pictures say why: 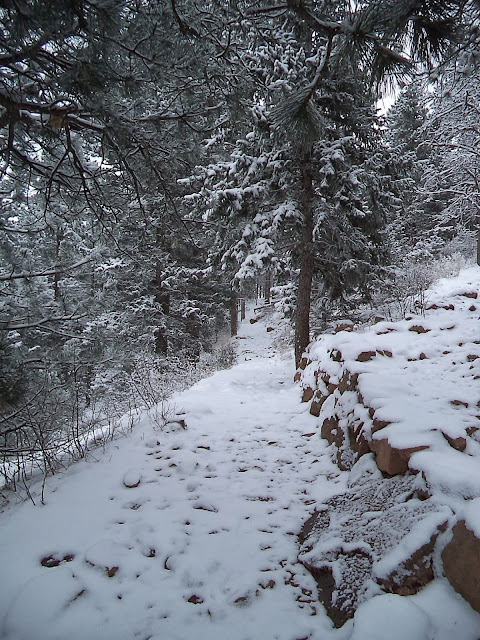 Wow, this was an adventure. Since I have been healing from a stress fracture in my foot, I have been doing a lot of hiking which has lead to some climbing. Also since, I'm studying engineering I don't get much time to go. So Friday night I took the bus to the trailhead nearest to Bear Peak in Boulder. As a preface, here is my GPS tracks (I turned off the GPS for a short segment).


I hiked under a setting sun for the first 45 minutes and then it was all headlamp from there. I arrived at the base of this huge slab at the base of Bear, it stretches out lengthwise across almost the entire mountain. I decided I would do some climbing. In the darkness it wasn't too hard to climb, I took my time looked around and found routes pretty easily. You can see what I climbed in the gap between the two GPS tracks. It wasn't until I realized that when I looked back down that my light no longer reached the ground. There was just a void of blackness. Didn't feel like messing with my camera 500 ft up on a wall to make the picture not suck.


It was an odd and somewhat surreal feeling, almost as if the world ceased to exist outside of my illuminated area. It was a pretty warm night, no clouds in the sky to block the stars, and the ridge line of the flatirons sheltered me from the wind descending from the west which hammered Boulder all day. Looking back east, I was above the trees and had a fantastic view of the front range, all the way from Boulder to Denver. I found my camera may not be the best suited for night photography, but here is the best shot I got of the city lights. For some reason the sweeping panorama wouldn't work at night either.


I realized at a certain point that downclimbing would take forever and be not fun at all, so I traversed my over to the North side of the slab and found a relatively flat gully full of solid holds and footing that was really easy to downclimb out of. Now that I was on the edge of this flatiron, I knew I could just follow it straight up and I would end up on the summit of Bear. A lot of really fun scrambling in this part. The moon at this point was positioned perfectly. As I climbed it was consistently framed by the edge of the rock and the trees. I took probably 80 pictures of this trying to make the flash flood the right foreground objects, this was the best shot I ended up with.

Although technically this was not on an actual trail, it often felt like I was. I would have to assume climbers have created there own trails in this area with all of the awesome spots. Eventually I hit a long stretch of talus which finally gave me a view of the summit. I often found myself turning off my headlamp to get my bearings. The flood of light right around me didn't allow my eyes to see into the distance too far. I hit the actual trail about 200 ft below the summit. Finally I reached the top. Quick advise: do not attempt a summit selfie with eyes adjusted to the dark with a bright flashing camera.
Heading back down I was zipping along the trail until...BOOM I lost the trail. I'm realizing I'm really good at getting zoned out and totally missing a turn and taking some route that vaguely resembles a trail. I realized that I missed the turnoff for Bear Canyon and instead bushwhacked my down to Fern Canyon. Yes, literally there were hundred of leave-less bush branches whipping me in the face. I have ran Fern Canyon many times before on the descent of Green Mountain and I knew the trail was right alongside the stream. I could here the water but the close I got, the denser the bushes became to the point where I couldn't get through them. I would guess my pace at this point was about 2 hours a mile. When I remembered there were power lines next to the trail, I was back on packed dirt pretty quickly. The junction of Fern Canyon, Bear Canyon and the Mesa trail is super confusing, judging on the lay of the land, when I took the downhill trail South, that to me made total sense being the Shanahan Ridge trailhead I started from was downhill and to the South. Wrong (again). I realized where I was pretty quickly, but I also realized that taking the Mesa trail back to Chautauqua would only add 30 minutes. But I was really tired and since I had left the shelter of the ridge, the wind had resumed its 40 mph gusts; I called my room mate, and he agreed to meet me at NCAR with his motor car. Great success. Hashtag Adventure.
Posted by Unknown at 10:10 AM No comments: