I finally got my bike up and running after a huge mess of converting to tubeless by various methods on February 17. After a brief trip to Moab, I haven't driven my car since -- for me at least, this is a long time to go car-less and I'm quite proud! So, it made sense that when I saw a weather window for Longs Peak that aligned with a day off from work that it would have to be a go at a winter duathlon.

The summer duathlon which has seemingly become more and more popular is now being followed by the next logical step of doing the duathlon in winter. Thus far, 3 people have summitted Longs self-powered from Boulder: Justin Simoni (19h46m), Tina Lewis (18h42m) and Anton Krupicka (8h51m). I had really hoped to get it done before Tony last year as I was certain I could go under 18 hours, but then Tony blew it out of the water on a beautiful day with a near untouchable time for me.

All times are measured from the Bus Stop strip club -- I know right -- on the northern edge of town where Broadway joins HW36 (though most people have to add on some miles given they don't live at a strip club). Given Abby's apartment is about 2.5 miles closer to that intersection than my house, and she made a rash decision (which I'm sure she later regretted) to wake up with me at 3:30AM and make me oatmeal it made the most sense to start from there. I slimmed down my pack to bare essentials which was:

Pedaling out of town in the darkness, the roads were nearly vacant, especially outbound from Boulder. I made sure to bundle up right away, knowing full well that staying warm was going to be key if I had any chance of completion. Handwarmers in the gloves from the start I cruised into Lyons, 12 miles into the day and was already behind schedule due to an excessively cozy breakfast for the impending misery as well as, well, biking slowly. I stashed my bike behind a gas station and used their facilities. Walking back outside my feet were a touch cold.

The sky began to flicker with pinks and blues, the pedals kept turning and my feet kept getting colder. The climb up South St. Vrain is never particularly steep, but it is sustained and long. My mind felt drowsy, its normally asleep at that hour and my feet kept getting colder. At a certain point my feet didn't feel cold anymore, the sun had crept lower on the canyon walls with each bend of the road until I was just seeing my shadow along the shoulder of the road. I stopped briefly to grab a cliff bar; putting my feet on the ground, I didn't feel them at all. Well, that's sub-optimal. I had brought two small plastic bags (cheap Goretex, really) for the descent but figure the ascent wouldn't necessitate them. I pedaled on, reaching a moderately windy HW72, but the views into Wild Basin in the winter at sunrise are inspiring enough to forget about any petty incline or uncomfortable toes.

Its longer than I think to the turn-off for the Longs Peak TH, but I expected that to be the case. I decide to jog my bike up the last couple turns to the TH to get some blood moving into my toes, they are numb to just above my ankle. There wasn't much of a transition to be had to hiking mode, so it went quickly -- pausing only to down a gel. I immediately hop over the creek on a packed down shortcut trail and carefully fill two soft flasks already loaded with Tailwind powder. My legs feel surprisingly good after the 4 hours of riding, so I try jogging. Okay, not that good. Further shortcuts weren't yet broken so I opted to keep a quicker cadence on a packed trail, my feet have basically regained total feeling at this point.

Emerging from treeline, the snow beneath my feet is rock hard wind slab. I rarely break through the crust on the slog through Jim's Grove, across the standard trail and around Mount Lady Washington's shoulder. My plan of ascent is via the North Face -- the most direct line to the summit. It looks snowy and I remind myself that its okay to turn around if my gut tells me its not safe. Below the Cables dihedral is a large wind slab, I opt to circumvent this by traversing higher left towards Chasm View which puts me right at the base of the technical climbing. I don my crampons and axe and begin climbing.

The opening moves of any climb can seem daunting, its an abrupt transition from mobbing up a snow slope. The moves engage me physically and mentally. I don't feel vulnerable or scared, I'm certain in each movement whether I move onto rock or snow. the dihedral itself is choked with ice, but plenty of holds surround the typical summer hand and foot jams to allow a pleasant climb. The final move traversing around the low-angled dihedral corner puts me on dry rock, an odd feeling in crampons and certainly my technical crux. Pulling around the edge I'm now beyond the short technicalities of the day.

Just below the summit, the snow dries up and I pause to remove my crampons but the feeling in my right hand prevents me from doing anything. I've heard of the "screaming barfies" and I've felt a painful rewarming in hands before, but this sensation completely overcame me. I couldn't use my other hand or think about anything else besides tolerating the fire burning inside my hand! Of course, it was only temporary and I used this forced break in the place of my summit break. I had a drink of Tailwind and a cliff bar and briefly removed my crampons. On the summit I walk straight to the top of the keyhole route and put my crampons back on.

I had hoped to feel confident enough going up Cables to also downclimb them, but it didn't feel like the safest option so I opted for the contrived yet easy keyhole route. With plenty of snow I was able to march down relatively quickly in crampons all the way to the keyhole where I stashed the crampons and axe for good and semi-jogged across the boulder field. I was home free in a sense -- all that was left was a short downhill hike and a bit of biking. With my feet already wet, I didn't hesitate to break through knee deep snow on the shortcuts through the tress that I know are lurking beneath the fresh coat of snow. This descent is unbelievably fun in winter. I pause at the creek before the trailhead to fill up some bottles for the ride home, I arrive back to my bike after a 6h51m climb of the peak.

I was most scared of plummeting back through the cold canyon on my bike so I now broke out my secret weapons. First, I peeled off my soggy socks and replaced them with crisp clean ones, then inserted my feet into plastic bags before putting them back into my shoes. This makeshift wind barrier works surprisingly well. I then insert fresh handwarmers into my mittens. Fifteen minutes of transition and I'm ripping back down the road!

The ride home is downhill, yes, but there are a few deadly little climbs before the real descent begins. I know these climbs are coming, I embrace them and they pass by quickly and efficiently spinning up in my lowest gear. The long winding descent to Lyons is a blast, somehow I don't get passed by any cars so I have the entire right lane to myself -- its quite a bit of real estate for bicycle -- so I can hug the turns tightly and safely. Nine-thousand feet below the summit of Longs Peak, Lyons is much warmer, so I take a brief pit-stop to shed layers before the annoyingly rolling highway back to Boulder. But the sun is setting, the sky is purple, and knowing its in the bag I'm too happy to mind whatever the ride home will hold.

I roll into town just as the dark of night has set in. I reach the infamous strip club parking lot at 6:47PM, making my official round-trip time 13:39:54, but I still have 30 minutes of riding to get back to Abby's appartment. With my red. rear blinky light out of battery I coast along the sidewalks and less busy roads and before I know it my bike is locked right where it was 14 hours and 16 minutes ago and I'm trudging up the stairs to my girl and a hot meal.

Fifty miles to the northwest, Longs is unchanged. My snowy tracks have vanished with the wind, I never signed the summit register and the monolith of granite does not care a bit. Recounting the day with Abby however, my excitement is tangible. I wasn't the fastest or the slowest but I moved myself from the doorstep to the summit of a mountain. I saw the sun rise and set, I was warm and cold, nervous and excited, and now only my own memories remain as evidence of the day's adventure.

Monday, 2/20 - Hidden Valley - 7 miles, 1300', 1:24
Joggin' around the best cruiser running trail in Moab with Abby. We found an unmarked spur of trail that led us to a ton of petroglyphs that were super cool! 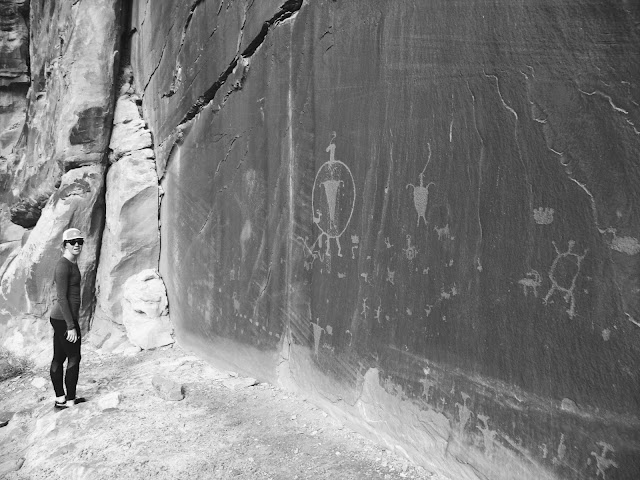 Tuesday, 2/21 - 1st & 2nd Flatirons + Salomon Group Run - 6 miles, 2200', 1:42
Got to Chautauqua early and to scramble the 1st. I decided to downclimb all of Free For All (second time ever). I left the Pullman way to early which burned a ton of time but otherwise it went pretty smoothly. It definitely sounded like someone was yelling "help" but I jogged down the rest of the route and found no one in need of help. Back at the Salmon Run Club afterwards!

Wednesday, 2/22 - Regarchifthist + Green Mtn + 2nd Flatiron - 5 miles, 3100', 2:17
Declaring the linkup of Regency-Royal Arch-5th-Fist to be called "Regarchifthist", its such a good one and is especially convenient for scrambling on windy days (though today was calm) as its very sheltered by the mountain. I descended to the 2nd and downclimbed the plain old Freeway to save time.

Thursday, 2/23 - NCAR Tempo - 13 miles, 1000', 1:38
Warmed up with Abby in a light snow that was melting on contact. We made a loop around the CU-XC course before she headed her own way and I launched into a tempo effort from the tunnel under Broadway at Table Mesa. With 2.5 miles up and down the NCAR road hill it made for a nice 5 mile tempo. The ascent was tough as the snow got heavier and began to accumulate but I manged, trying to run hard going down I unfortunately got a terrible side cramp that made me slow down a ton, but the uphill effort was the important part. Jogged around with a bathroom stop in a CU building for a longer warm down.

Friday, 2/24 - Green Mtn - 7 miles, 3000', 2:00
Easy with Jack for the second tracks up the hill in slick, knee deep powder. Tired legs and slow conditions so we just chatted along at a conversational effort.

Saturday, 2/25 - Poorman Rd - 12 miles, 1700', 1:23
Tempo effort from BRC up Sunshine Canyon down Poorman's Road and back the exact same way. I was hoping for Gold Hill but thought I wouldn't have time -- with the energy I felt I should have just gone for it, 8:30's going up and 5:30's going down should have been plenty fast enough for the full loop. Ah well, good run.

Posted by Unknown at 4:15 PM No comments: