4/18, Tuesday - 1st Flatiron, Green Mtn, 2nd Flatiron - 7 miles, 3700', 2:14
My scrambling form is still properly terrible so it was another slow ramble up the 1st to tag Green. Downclimbed the 2nd Flatiron until I met Abby just at the main rib then turned around and finished the route with her. We then sprinted back down towards the Salomon Run but couldn't quite catch up. 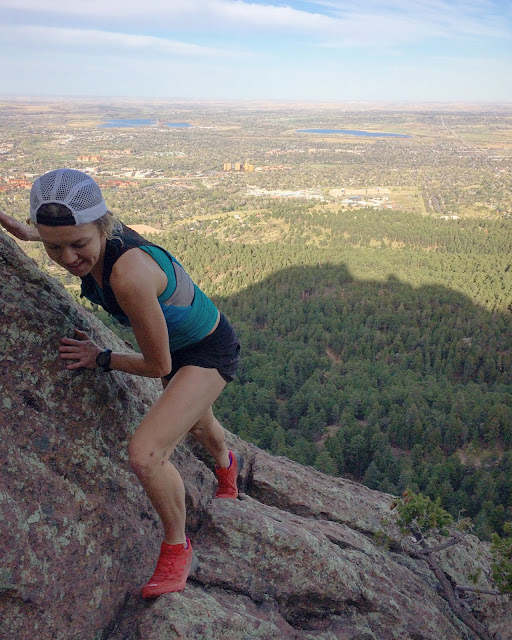 4/19, Wednesday - Bike: Eldorado Canyon
I've been itching to get back into Eldo so despite the wind I hoped I could find something sheltered enough. The ride there took forever with the oppressive headwind putting me in my lowest gears just to get down hills. I made a few moves up Boulder Direct then surmised it was neither fun nor safe so I just rode back home.

4/20, Thursday - Independence Monument - 7 miles, 1500', 6:09
On the way out to the desert we stopped to check out Independence Monument, a proud tower of sandstone just outside of Grand Junction. I took the first lead but we accidentally started up "Geezer Highway" instead of "Otto's Route", the latter being much safer and easier. After carefully getting to an anchor of a fixed nut and an angle I had to leave a locking biner on the webbing to be lowered back to the ground. We then found the start of Otto's and started up. The first two pitches were straightforward, but the third really gave me hell. It was a tough move to make, especially with a backpack with an extra rope (for rappel) and a double rack (totally unnecessary). Eventually, I just tried harder and made it through. The next pitch was 4th class followed by a short section of bolts to a big ledge leading to the summit pitch. On lead, I got to within 5ft of the top but couldn't manage the last move. The combination of too much weight, really cold and strong winds and lack of strength was too much for me. Abby, freezing on the belay ledge was especially cold standing still in the wind. She lowered me back down then we made two rappels to the ground, the final a full 70 meters using both ropes! Super cool even if we didn't make the top.

4/21, Friday - Pothole Arch - 13 miles, 2700', 3:49
After a late night of scavenging for one open campsite we were excited to get out for a run rather than drive around the city in the dark looking for vacant sites. I did this loop once before and really liked it. Starting from Kane Creek we ran along the Colorado River for a ways before angling straight up onto some slickrock to Pothole Arch. Next was a short section of trail before joining a 4x4 road which would loop us back to our car. Just as we were joining the road however, I noticed the car key had fallen out of my pocket! We turned back around and steadily searched our prior path. Having found nothing all the way back to Pothole Arch and knowing there wasn't cell service at the lot we used this blip of service to call AAA to send a tow truck so we could at least get back to town. By the grace of the heavens on the remainder of trail back to the car I spotted the key at the bottom of an especially steep hill I had ran down earlier. We should have expected it there, it was by far the most likely place it could have been!

4/22, Saturday - Canyolands NP - 26 miles, 4300', 6:15
This was the big one for the weekend. Last year I did a similar loop but had my knee lock up halfway and had to limp 9 miles back to the car without bending the joint. This time -- feeling generally healthy -- we planned a larger route to truly circumnavigate the park. Starting from Squaw Flat TH we first went around Lost Canyon for the long way to the Druid Arch out and back. Although a bit longer, this canyon is not to be missed; the whole route is in the depths of the lush canyon or up above on the slickrock bluffs with views of the Needles and La Sal Mountains. Getting to Druid Arch I remembered as a long sandy slog, but with a functioning ITB it wasn't too bad at all, and the views were tremendous! From Druid Arch we took the Joint Trail to Devil's Kitchen, a meadow between striking needles that is way more runnable than most of the trails -- but still quite sandy. Totally exposed to the desert sun, Abby began to feel pretty dehydrated. I've learned I really don't need that much water so I happily handed over the majority of my remaining water. The final section back to Squaw Flat is much longer than you'd think it is and can be difficult to truly appreciate while dehydrated and 5 hours into the day. Luckily, the parking lot sort of surprises you when you get close. Fantastic route that should be on everyone's list!


4/23, Sunday - Wall Street Climbing - 2:30
For our final day in the desert we went down to Wall Street to clip some bolts before driving home. First we hopped on a random slab route that looked moderate so Abby could get back to leading. It turned out to be a rather slick 5.9, Stego Slab. We then traveled a bit further down the road and found the actual moderates to get Abby's head back into leading. She first lead "Chocolate Chunk", a 5.3 that she could easily solo but got could practice clipping on lead. Next she lead Yogini, a 5.7+, I was happy to see her moving confidently on the rock again! Last, I put the rope up on Banana Peel, 5.10a; after taking a few tries to get the starting moves I was able to clean the route. Abby, hesitant to start up the route found the start similarly difficult but was able to efficiently move through the rest of the route really well and was showing great trust in her feet (something I think has been holding her back). With a fine route under are belts we were happy to call the weekend in the desert to a close!
Week Totals:
65 miles
18,000ft
14:57
Posted by Unknown at 10:30 AM