4/24, Monday - South Boulder Pk, Bear Pk, Green Mtn - 15 miles, 4500', 2:47
Ran from home up the Bluestem trail to Shadow Canyon. I kept a moderate pace, hoping to catch the RMR group on Green Mtn. I put a good effort into my Green to Bear segment but came in just behind Sage's Strava CR on the traverse -- I lost most of my time on the highly runnable section of Green-Bear where his road legs are too quick to stay with! Hit the summit of Green just as the group was descending so I lumped onto the back to chat with friends rather than fight my way to the front with mindless competitiveness.

4/25, Tuesday - AM: Eldorado Canyon - 1900', 2:54 || PM: Salomon Run - 3 miles, 600', 0:34
Biked to Eldo in the morning and did my Wind Tower circuit (Boulder Direct, West Overhang, Calypso, Wind Ridge) then hiked to the col separating the Whale's Tale form the South Buttress. I started up Pseudo Sidetrack, a moderate 5.4 which I enjoyed to the halfway point then spied a fun looking section that appeared to be more fun. Heading up a steep face I joined a beautiful dihedral and handcrack, then some more face moves to top out on the East Slabs. I found out later the route I went up was PA's Variation, super cool! Salomon run in the evening.
4/26, Wednesday - 6 x 3min - 12 miles, 1200', 1:24
Warmed up to the Bluestem TH off of HW93 then started the intervals. Three minutes is a savage interval time, you can't really settle into anything sustained but its also long enough that the quick pace eats your soul for the final sixty seconds. I was motivated knowing that the faster I ran the intervals, the closer to the Mesa trail I would get which would inevitably be less sustained uphill! Since I still felt relatively alright after the sixth, I kept a steady effort back down the South Boulder Creek trail and through the Buffalo Ranch back home.

4/27, Thursday - Betasso Preserve - 3 miles, 500', 0:32
Kinda fun since it was a pretty morning but Abby and I both fell pretty hard over literally nothing on the trail! Given the carnage we called it early. 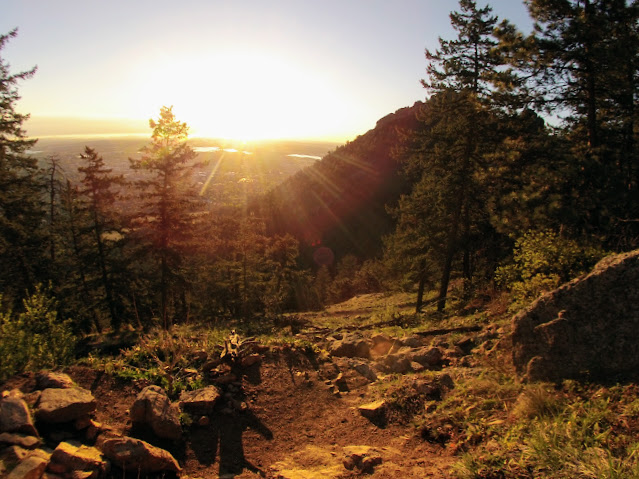 4/29, Saturday - Green Mtn x 3 - 15 miles, 8200', 5:06
A nuclear bomb of wet snow hit last night so today was properly slow. I kept the route to Amp-SR-GM but even with the most efficient line it was mentally trying to move along like a slug in such sloppy conditions. I was hoping to get to 10,000ft for the day but I had obligations for the evening so called it once it was after 2PM. I was able to get 1100ft more than yesterday by doing a bunch of little out and backs catching back up to Abby and Kyle (who joined for sections) at various points.

4/30, Sunday - Gold Hill - 29 miles, 4000', 4:16
It was rough getting going this morning for both Abby and I, so we were happy to let some snow melt (its now 60F after snowing 1ft yesterday!) while eating a proper breakfast. Without giving myself time to think of any of the great reasons to not do this today I left the house with two flasks of tailwind, a hotshot and a handful of gels. I took it pretty easy all the way up to Gold Hill. I stopped once at the bathroom at Sanitas then again up top where I bumped into Ryan on his bike. I still kept it easy heading back down Sunshine canyon until somewhere around the Poorman's Rd turnoff where I started a series of fartleks. I did a few intervals all the way home, the hardest being a relatively all out push from Eben G. Fine park to CU campus near Folsom street.
Week Totals:
92 miles
26,100ft
18:40
. . . . plus a bit of biking

Good peak week of volume heading towards Quad Rock 25 in two weeks -- time to start easing off of the gas a bit.
Posted by Unknown at 4:36 PM