1/1, Thursday - Flagstaff Mtn, Green Mtn, Bear Pk, South Boulder Pk x 2, Bear Pk, Green Mtn - 21 miles, 8,700', 6:38
Started from Chautauqua and blazed up the Crown Rock trail to Flagstaff, then over to the top of Green, paused only to don microspikes and sludged through only vaguely broken trail of Green-Bear. Bear Peak West Ridge was literally the worst. Wet snow that melted into your shoe immediately despite it being freezing cold. Basically post-holing the entire way up. Touch and go on the summit of Bear to South Boulder where trail conditions got even worse! Some minutes of knee deep slog later and I was atop South Boulder. In order to qualify my second ascents of Bear and South Boulder, I descended the entirety of Shadow Canyon. I very much enjoyed Shadow packed with snow far more than dry. Re-ascending was horrible, especially since I knew I had barely broken trail to S. Boulder so I had to do that again. I finally met some other people on Bear which lightened my spirits just enough to make it down to Green-Bear without screaming curses at the snow. On the final grind to Green I was at maximum sloth, I even got passed by a hiker for the first time ever. About 5 seconds from the summit Scott Jurek descended past me, so that was cool. The darkening sky made the decision to skip a second round of Flagstaff, so I descended the middle route. Got to about the Saddle Rock junction when I rigged up lighting system by propping my iPhone up in my UD race vest water bottle holster and using the LED flashlight. It actually worked really well besides that you couldn't turn and look using only your head - its definitely a super substitute for not having a head torch (and of course having a phone). Aside from dealing with choppy and crappy snow, I was pretty happy at how my legs and lungs felt; big day, but I didn't feel completely annihilated. 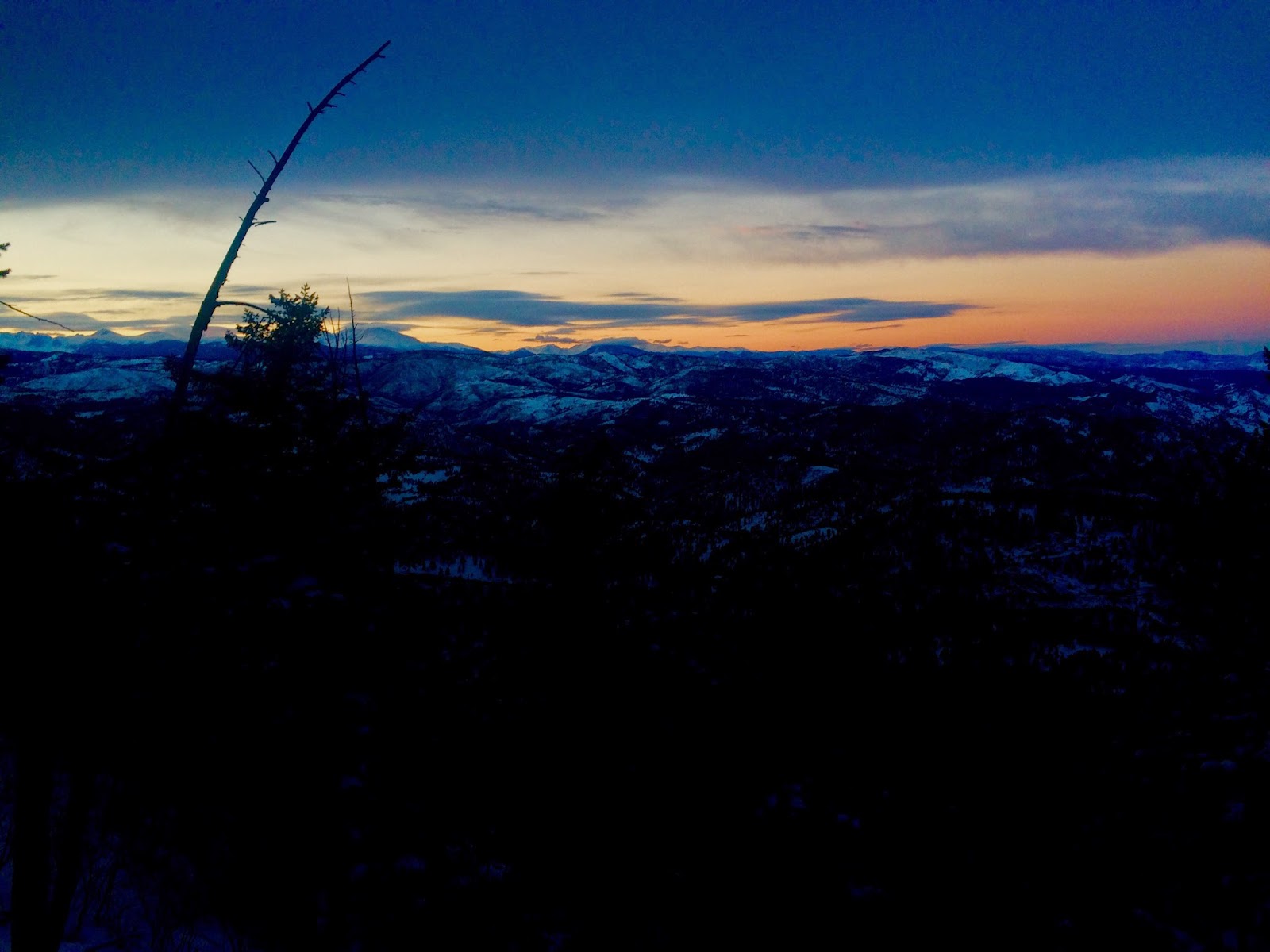 In between running some errands I snuck in a quick tag of Mt Sanitas. I was just coming from the eye doctor and thus my eyes were dilated; this meant that even with sunglasses the sun reflecting off the snow was nearly painful.

1/3, Saturday - South Boulder Trails - 7 miles, 1.100', 1:14
I originally set out for South Boulder Pk and Bear Pk via Shadow, but must have taken a wrong turn somewhere. The thought of 3,200' didn't sound too thrilling to my legs so I just rode the trail back down then did another loop across the street on the Dowdy Draw trail. Ended up being a very fulfilling run.

Well, I think that's a new personal best for vertical gain in a week. Happy to say I had 12 summits this week too, but only 9 count for my 2015 count.

1/4, Sunday - Green Mtn - 6 miles, 2,800', 1:22
I was really trying to run every single step today (something I've never done), though at a certain point there was so much drifted snow that I was slipping, falling and post-holing. At that point running was akin to a treadmill so I ended up frustratedly hiking a couple brief sections. Otherwise, I really think I would have made it. After a brief tag of the summit boulder and strapping on the micro-pokers I took a hard descent, clocking in at 16:08, a PR by 4 minutes. Pretty happy with the run as a whole.

1/5, Monday - Loveland Skiing - 6:05, 17,700'
Easy and fun day out with an old friend I hadn't seen in over a year. Skied some fun, bumpy and steep stuff before lunch then we exchanged our respective skis or board for the afternoon. It was fun to have to really put forth effort on blue runs. Skiing will always be my number one, but trying to figure out the mechanics of a board on mild terrain was a nice change of pace.

1/6, Tuesday - Copper Skiing - 4:56, 22,700'
Decent day for me, but a generally terrible day nonetheless. What started out as a great day of skiing with my sister and her boyfriend turned sour when her boyfriend's brand new skis (like the first day of use) were stolen during lunch. He is one of the most passionate people I know when it comes to skiing, it was pretty crushing. I - and I think everyone - likes to think highly of where they are from, that the people are good, trustworthy and kind. It tarnishes the whole community when stuff like this happens. Granted, this is one of the first times I've heard of this (personally, that is). I just hope this is some improbable misunderstanding and that things can be set right again. 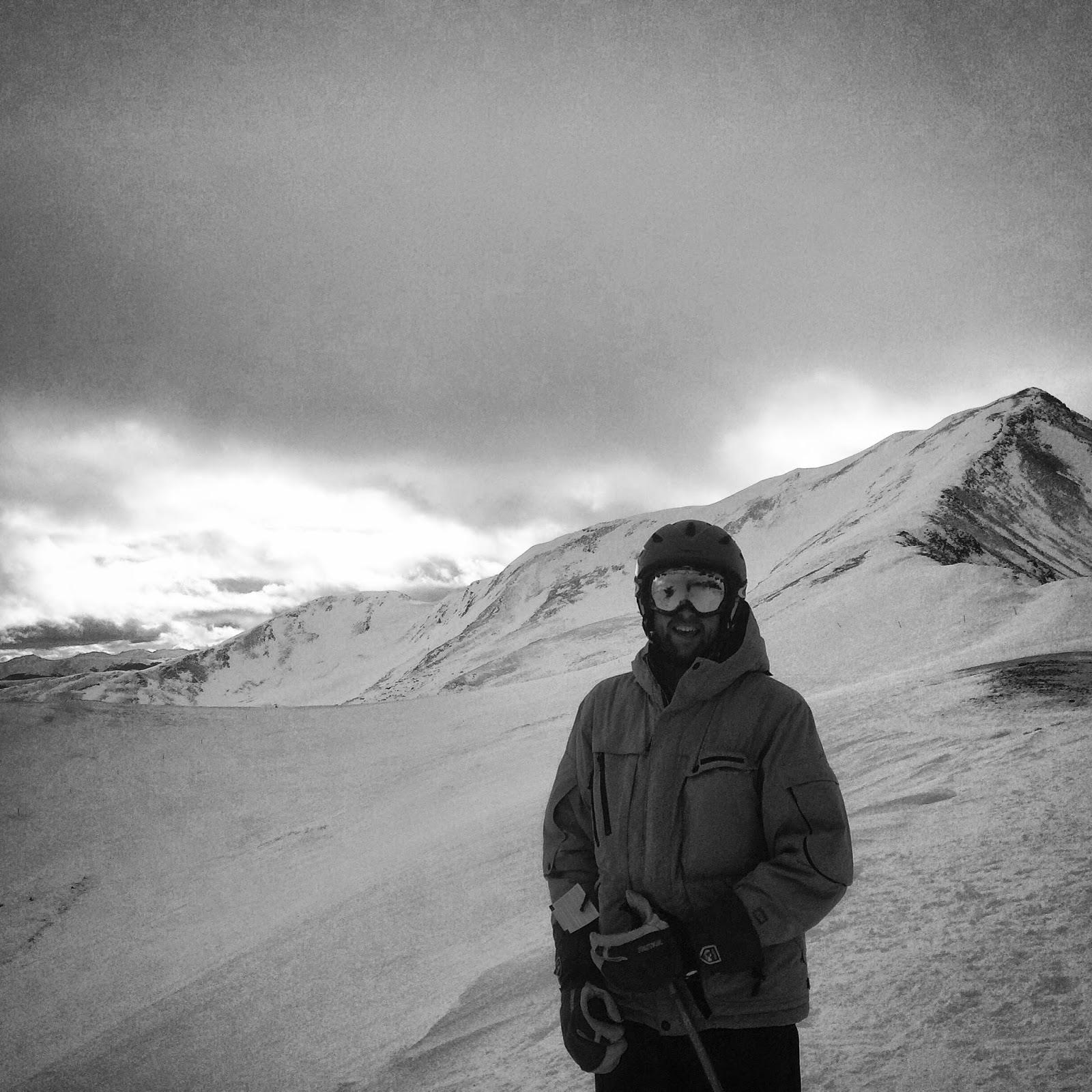 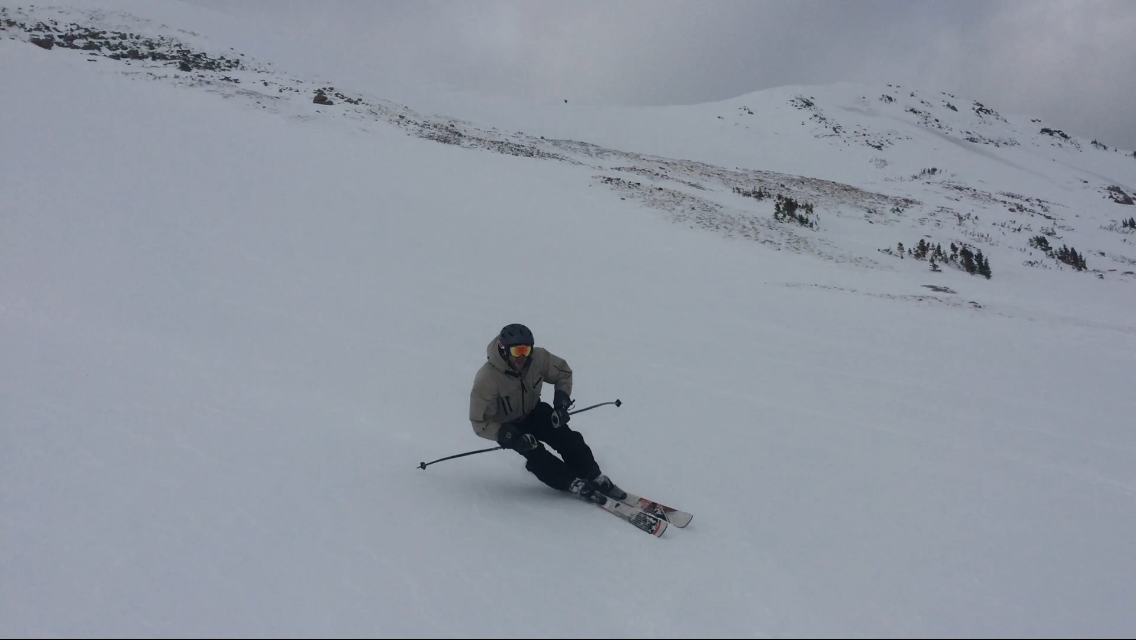 1/7, Wednesday - Green Mtn - 6 miles, 2,800', 1:31
I was honestly going to take a rest day, but given the cloud inversion the pull of the mountain was insurmountable. Felt good to essentially coast up and down the mountain without too much effort. Nice sunset and a decent cloud inversion. 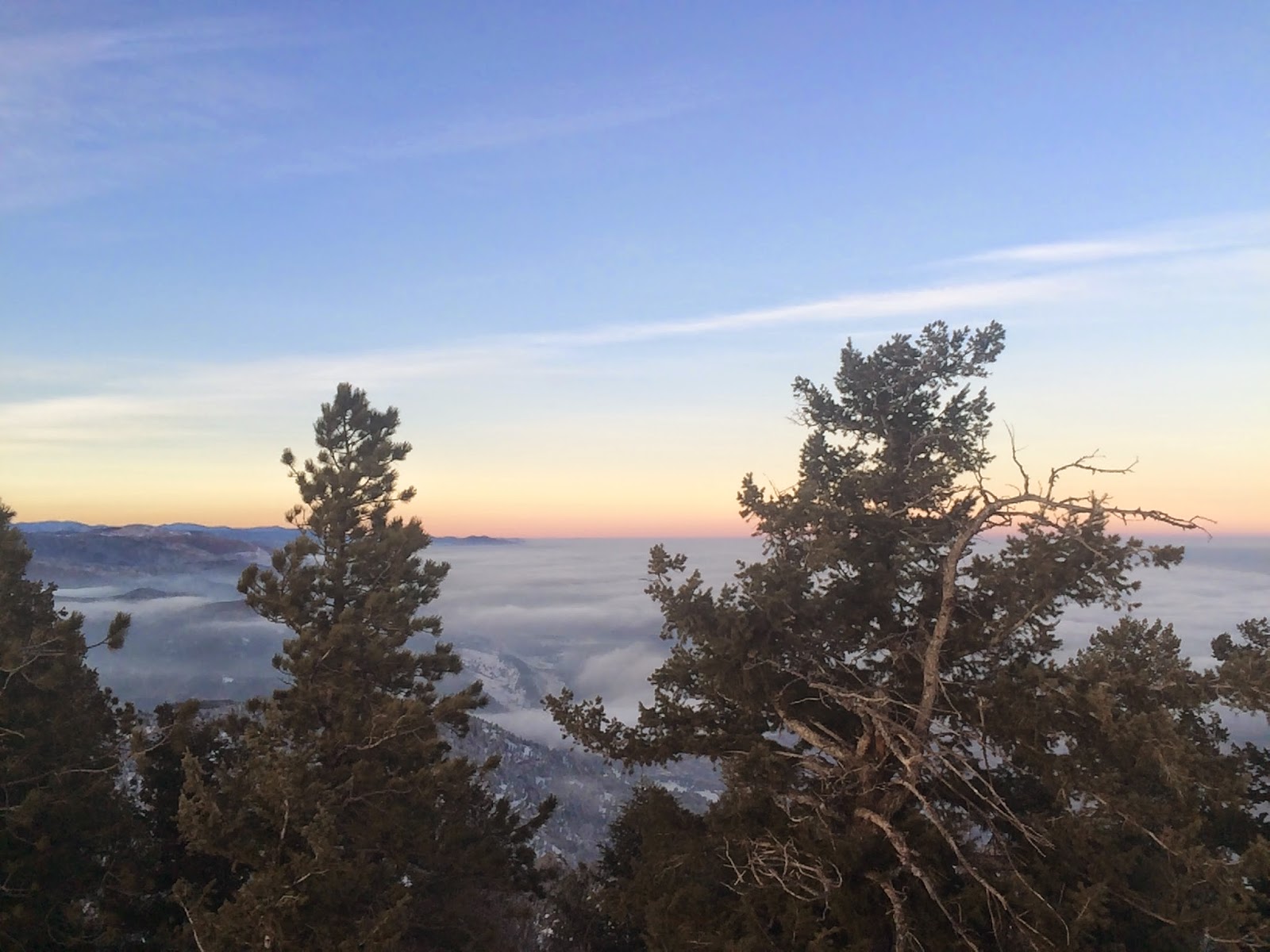 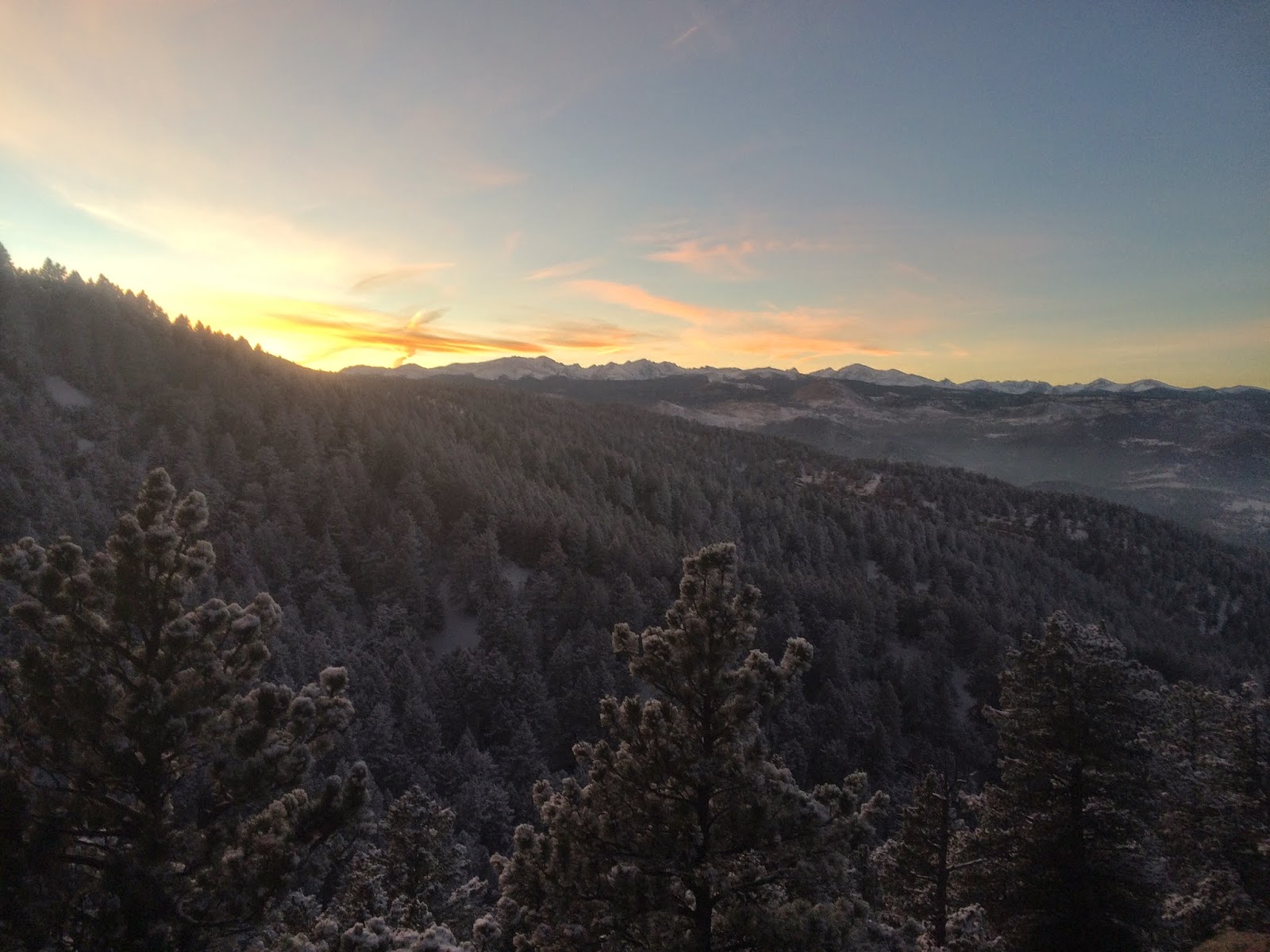 1/8, Thursday - 2nd Flatiron - 3 miles, 1,300', 1:30
Crazy day. Temperatures were in the mid-50s so I was expecting a fun slushy day in shorts. Getting to wear shorts proved to be the only positive aspect of the day. The entire trail was a sheet of ice. I was honestly looking for foot holds (pockets of ice or rocks poking through) with each step. I had to use my hands in several spots - normally smooth trail. Freeway went fairly well all things considered. I had to work around some significant sections of ice at the beginning, then it was just avoiding all of the water draining down. I had contemplated continuing on to Green, but the thought of descending the shady north side of the mountain was terrifying. Hanging onto branches, hopping between rocks or sliding on all fours desperately clawing at the ice with my hands to self arrest I finally made it back down.