2/8, Sunday - Quandary Pk (14,265') - 7 miles, 3,500', 3:48
Did the East Ridge route with Andrea in prime conditions. I felt I was lagging a bit initially from yesterday's effort, but our effort was relatively mellow, definitely no running. On the ascent it felt decently cold, we used snow shoes from just below treeline to the summit. After some summit snacks we descended into ridiculously warm temperatures. I rolled my tights up above my knees and long sleeves above my elbows. Unbelievably easy in these conditions as opposed to last years unconquerable blizzard. Altitude hit me hard after not being up high in several months, if conditions stay similar I'll try and do this again next week.
2/9, Monday - Green Mtn - 10 miles, 3,000', 2:10
Again with RMR. The typical front man Ryan Smith won the SOB100k this weekend - against some tough competition and thus earning a free WS100 entry - so keeping up front was a little easier tonight. My quads felt particularly taxed so I found an nice aerobic groove in my power hike. The last bit of Ranger and a third of Amphitheater/Saddle was smothered with ice. Without traction I hopped from rock to rock arresting with tree trunks when possible - and just falling when it wasn't. Good ol' death defying fun. While running back home I was bitten by a dog. I was moving away from it quickly enough that it didn't break skin. This only solidifies my stance as pro-cat in the always controversial cat vs. dog debate.

2/10, Tuesday - Slowly Dying - 3 miles, 200', 0:26
Can I just die? Gosh, I'm not sure I've ever had such a tough time getting out the door. I tried going back to sleep twice, but after an hour of the wake-up, sleep cycle I decided to stare at my computer screen in the hopes the harsh artificial light would permanently awaken me. After said struggle I yawned and grumbled onto my feet. About half-way to Chautauqua I had this intuition that today maybe just wasn't a day I should fight through. I turned around and jogged home. By the time I was home it was completely obvious that I was completely drained. I hadn't had a day with less than 90 minutes in 3 weeks, so I felt totally fine bailing today.

2/11, Wednesday - Green Mtn - 8 miles, 3,200', 1:49
After taking yesterday easy I felt like a new man today! Covered the 2 miles to Chautauqua a full 2 minutes faster than usual, then up the trail to the first flatironette. After a few minutes smothering my feet on wet holds I bailed and ran back down and up the standard NE ridge. Saddle rock was pretty icy so I took the NE ridge back down too. Energy is such a luxury!

2/12, Thursday - Green Mtn - 9 miles, 3,000', 1:46
Left around 5:45 as I had to finish a lab that seemed impossible which ended up being resolved rather quickly - missed a bunch of sleep there! Power-hiked 90% of the way up Green via the Amphitheater, the ice is akin to a plague on the top quarter of the mountain right now. I was glad I had spikes for going down. Descended to the 1st Flatiron and back home.
2/13, Friday - Spy, 1st Flatiron, Green Mtn - 10 miles, 3,100', 2:09
I tried taking a use trail I noticed going off into the woods today and it ended up taking me to the very base of the Spy. Cool. There is a significant roof (I'm not really sure the precise term) on the true East face that I didn't quite feel comfortable sending solo. Instead I managed an easy and obvious work around on the south face. Continued up the North Arete route to the 1st and subsequently to another Green summit at a nice easy effort. Descended behind the 1st.

Mileage was a hair less due to the bailout on Tuesday; which was, of course, completely necessary. Vert was around 20k, which is my main qualifying criteria for a good week nowadays. The warm weather is pretty fun right now, but with snowpack so low and temperatures at record breaking highs, I worry how dry and flammable the summer will be.

2/15, Sunday - Off
Sometimes you have to do the homework you had been putting off to run.

2/17, Tuesday - Flagstaff Mtn + Green Mtn - 12 miles, 3,500'
I did a short jaunt up Flag before dropping down Crown Rock and taking Gregory Canyon to the middle route up to Green's summit. E.M. Greenman was unbroken aside from one set of tracks so the going was slow. Going down, I took a shortcut through a boulder-field that I would never normally run in fear of breaking my spine, ankles and legs. Today however the snow was up to my waist and I couldn't even feel the rocks.
2/18, Wednesday - AM: Flat - 10 miles, 400', 1:09 - PM: Green Mtn - 10 miles, 3,000', 1:51
I stayed up later than I wanted last night, so I was forced to split the 20 miles I had planned for the day into two parts. I hadn't run with purpose on flat (meaning under 8:30 pace) ground in over a month, but I was happy to let my pace settle around low 7's - aside from a short choppy section of snow and ice. Of course, no day is complete without a summit of Green which I happily satisfied subsequent to the day's learning. Plenty of drifted snow kept the pace pretty slow. 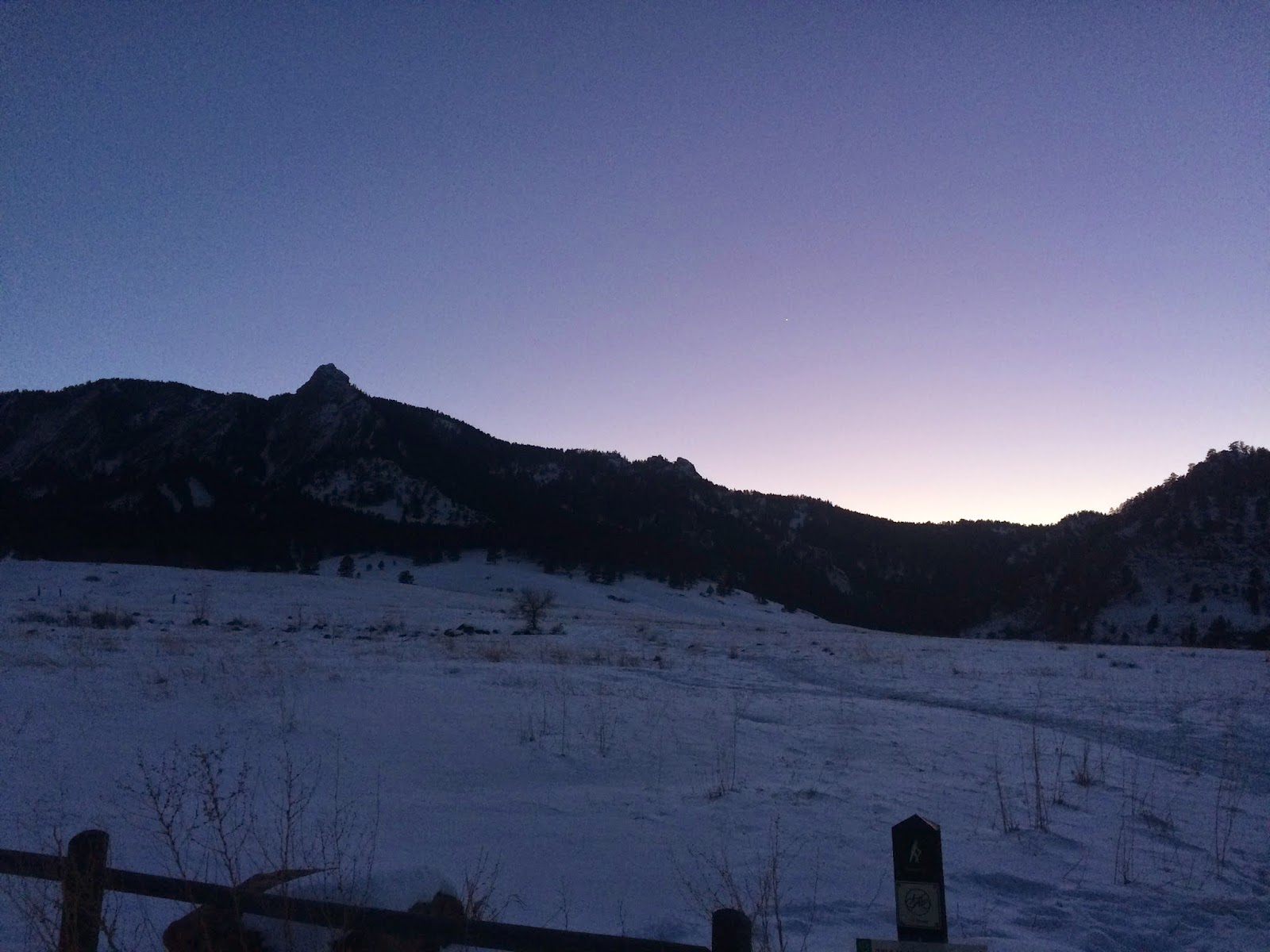 2/19, Thursday - Flagstaff Mtn + Green Mtn - 12 miles, 3,400'
Up Flagstaff from the creek path, Ranger to Green, Amphitheater back down. Amongst the snow conditions, wind, and my current physical state, there was one common theme: terrible.

2/20, Friday - Flagstaff Mtn + Green Mtn - 16 miles, 3,500'
I put myself into a mental state that today would suck, but I got halfway up Green and realized that besides some somewhat tight legs, I was feeling alarmingly well. The extra miles today came in the form of Bear Canyon which also surprised me at how much I enjoyed it. Super mud on Mesa and Skunk on the way home.

2/21, Saturday - Flagstaff Mtn, Green Mtn, Walker Ranch, Eldorado Canyon, Mesa - 32 miles, 7,000', 6:43
With about a foot of fresh snow on the ground, this took every ounce of will power I had. Took the creek path to Eben G. and powered up Flagstaff and Green, still feeling pretty good, but there was already a lot of snow despite the trail already being broken. Ran down the West Ridge and a good bit of asphalt to get to Walker Ranch. Walker was completely unbroken knee deep snow, painfully slow and requiring a massive amount of effort, especially on the uphills. A long snowy blur of time and I was - barely - running down to the South Mesa TH from Eldorado Springs. On the initial climb on South Mesa I could not run. It was the worst I've felt in long while, probably since Four Passes. Anyways the misery continued until some older women passed me and some fire erupted inside me. Okay, it was more of like a small candle, but from that point I ran like slug the rest of the way home. I had to tuck my GPS into my sleeve so I wouldn't see how depressingly slow I was moving, but hey, what did I expect for a 32 mile run in snow on the tail of a hard week?
Week Totals:
102 miles
23,700'
20:18

I set a goal of 100 miles this week, so it was pretty cool to see that come to fruition. In a couple weeks and I'll do a week entirely focused on vertical gain. I would have split Saturday's 32 into separate 15's but with Colorado finally getting snow skiing is a must this weekend. We'll see how the legs feel skiing tomorrow.

It was also interesting to see that Kilian's record on Aconcagua was broken this week - by the same guy who broke his Kilimanjaro record no less. It just confirms that - as hard as it may be to believe - these people we put on a pedestal are human. No record nor racer is completely untouchable. Of course in the case with Aconcagua, Kilian essentially established the record as previous attempts were largely undocumented and were seemingly quite soft to the likes of the speedy Spaniard. With Everest projected to be the grand finale of 'Summits of my Life' (and maybe a return to Elbrus) it will be interesting to see if Kilian tries to reclaim either of these records - or any more that may fall. Personally, I'm still trying to break 40 minutes up Green Mtn, which loads of people have already done. To each his own.


And last, this article I found to be a an excellent read.
Posted by Unknown at 6:56 PM