I'd imagine the Gore Range is on a lot of people's "list", its close to the front range and is as full of intrigue as it is vacant of 14ers. I also had something in the range on my "list" for a while and also like many had instead somehow forgotten to ever venture into the Gores. Well, I finally made plans to climb something in the range last weekend and in typical fashion I couldn't simply go recon the range with a fun, safe and easy jog up a pretty peak. No that would be far too much of a cop out when I could instead select a mysterious and technical ridge that had seen only two (I believe) prior ascents and then link it into another classic ridge traverse and then finally warm down on another moderate ridge to tag another arbitrary high point. If you're gonna do something, do it one-hundred percent -- or preferably, one-hundred-fifty percent.

So the plan was set to start at the Rock Creek TH, run to the Boss Mine then successively dispatch of Asgard Ridge (and of course a tag of Palomino and Valhalla), the Grand Traverse and the ridge walk to Keller then cruise back out on the trail back to my girlfriend, Abby, who I would drop off 20 miles south to run the Gore Range trail to the TH. Literally nothing about this plan could fail. Right?

I left the parking lot around 7AM, later than I wanted but so it goes. I made it to the Boss Mine by 7:40 where I left the trail to contour to the southern side of the North Rock Creek drainage. The bushwhack was surprisingly straightforward, dry and thinly treed -- minus a small and grungy rock buttress that I stubbornly elected not to simply walk around. The snow began in the trees and was steep enough to warrant an axe but not crampons. The march continued upwards, crossing a few animal tracks then gaining the grassy meadows which compose the eastern end of Asgard Ridge. The route ahead looked complex, though without understanding  what I was seeing the towers camouflaged themselves into the north aspect of Valhalla Pk.

The ridge gradually morphed from a grassy runnable tundra to a narrowing spine of large blocky talus. What in retrospect was a benign knoll marked the first "challenge" of the day, fun 3rd class moves and what appeared to be just more talus walking ahead. Ha! The two reports of this ridge must have been full of it when they said "low 5th class" -- whatever that dangerously subjective term means! Figuring I would be finished with this minor obstacle of ridge I proceeded onward. 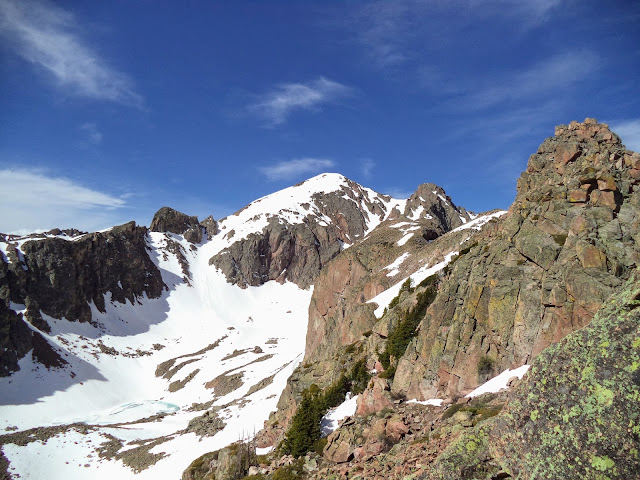 Things began to change. The ridge sharpened, towers grew more prominent and notches plummeted in sheer faces to thin cols. I reached the first of numerous notches and greeted an uninviting and exposed downclimb to the notch. I was able to leave the ridge and instead crabwalk down a dusty 4th class slab then traverse snow to the next tower. This next tower was almost comically imposing, Bypassing this tower was an easy decision but still involved a dirty traverse of the loose rock on its northern side. Okay, this traverse is getting pretty real!

The remaining ridge left little to the imagination: hard, loose, treacherous, spicy, exciting and adventurous. I began ascending the knife edge ridge to the next tower carefully testing each hold before using it. I searched along the north side for a bypass again but found nothing. I was beginning to feel uneasy about the route -- specifically the rotten state of the rock. I returned to the crest and decided I would check the south side and if nothing jumped out immediately I would bail. I spied a route around to the next notch by spiralling around the south face on a series of ledges. After an extremely airy series of down-mantles I found a Broadway-esque ledge to maneuver myself into the next notch. This was the technical crux of the day for me -- it felt 5.6 -- it was thankfully on good (well, good enough) rock. I believe this went around "Point Odin", it would seem from the only other TR for this route (or that I could find) that up and over may have been the easier option, though more exposed.

Exasperated, I stared down the final tower standing between myself and Palomino Point. I climbed two thirds of the way to the top of the tower and then tried to find a similar south side traverse to what I found before. The ledge narrowed and then fell away in a startling drop. Reluctantly, I returned to the ridge crest to check the north side. Quickly scrambling back up I made biggest mistake of the day; reaching for a hold I blindly pulled and felt the bone chilling grind of the flake freeing itself. The rock was to heavy to push back but I was able to hold it in place for a second to set my feet, release it then dash out of its way as it thunderously cascaded down and into the air. Shaken, I collected myself. This could have happened at any point earlier, this terrain was no different than the previous two towers, but if you roll the dice enough times, things can happen. I wanted off the ridge immediately, turning around was certainly an option but there was less suspect rock above me then behind me so I elected to continue upwards. I found what I believe was the same "crabwalk traverse" mentioned in the beta TR. Despite strictly pushing not pulling on rocks and trying to evenly distribute my weight across all available holds I dislodged another block. Holding it in place, I again moved out of the way and then let it lose. The sound of crashing rock and the wind fluttering the hood of my coat paired with ominous feeling of being alone came to a peak. I nervously skirted the remainder of the tower to find a snow field softer than I'd prefer but a welcome change from the choss.

I charged up to Palomino Point, slapped the summit, didn't bother signing a register, walked 100ft lower to a sheltered alcove from the wind, dropped my pack and sat down. I had never been so mentally exhausted. I had never felt fear like I had felt during the hour or so from the first rockfall to the summit. I had studied maps and knew I could bail down to Deluge Lake and find the trail down to Vail. I found cell service and texted Abby my change of plans, hoping she had yet to reach the TH where there was no service. She had unfortunately just reached the TH, having bailed on the Gore Range Trail due to snow covering the trail and instead ran 5 miles back to the N. Tenmile Creek TH and then ran the 15 miles of road, bikepath and highway to Rock Creek! Realizing my phone could potentially run out of battery (I had a SPOT as well), I messaged a couple other friends with my new descent route and location.


The descent to Deluge Lake was loose, but the fun non-exposed kind where you surf down then shoe-ski snow. After re-examining the topo and navigating to a contouring section of trail at a specific altitude I dropped beneath the snow line, found patchy sections of trail then eventually the trail itself which I happily -- and safely -- dashed down to the sanctuary of civilization and dare I say pavement! Unfortunately, with Abby out of cell service on the other side of the range, the only way for her to realize I was in Vail was to get really worried, go get cell service, get a bombardment of messages and then see my SPOT. My plan was to stay put and wait it out but a ride to Frisco was offered (can't thank them enough!) along with a phone charge. So, I was able to shorten her inevitable drive and get myself to the Next Page bookstore to continue waiting. Eventually and inevitably we reconnected driving straight to the Rio Grande for the biggest meals we could get!

This was a hard route and learning experience in many ways. I learned its sometimes best to turn your back on something that doesn't quite feel right than to test the waters and find out for sure. I learned that objective hazard above anything else is something I'm not okay with. I learned that having full knowledge of the area is critical. I learned that being able to communicate and share your location is paramount, especially alone. I think I made a poor judgement pursuing this ridge, especially solo -- and that I should have turned back earlier rather than finding out what was ahead. I also believe though, that upon reaching Palomino Pk, my bail strategy was well equipped and executed. I'm happy I didn't listen to music on my phone to save battery, that I contacted a few people my change of plans and that I had a SPOT if I needed it. Its easy to not care you don't have these things when you don't consider there usage but I never want to be in the situation where I'm ill-equipped wishing I had other options. I love the mountains, climbing, running and scrambling but not enough to play Russian Roulette with them. I want to continue to explore the unknown and push myself but I always need to remember to first evaluate the risks and furthermore, to remember that harder, more exposed and higher doesn't always mean I'll enjoy it more. The most fun I had this weekend was romping up the standard trail on Quandary with Abby the next day, certainly not fearing rockfall on Asgard Ridge.
Posted by Unknown at 5:09 PM