Devil's Thumb to "Nearby Summit"

Got way too ambitious this weekend thinking I could run another 20+ miler after already being at 53 miles for the week thus far. Obviously I did not finish all 20+ miles. My goal was to the same Devil's Thumb pass I do all the time and then head South, summit Mt. Jasper then Mt. Neva then descend down to Arapahoe Pass/4th of July Campground back to the main Hessie trail head. So what I realized once I got to the divide was that A) this loop was really hard B) there was no way I would finish it today. Also, I got a new camera!

Took the early bus to Ned then took the shuttle to Hessie. Run started off really well, especially considering I got about 3.75 hours of sleep. I had taken Friday off so I often felt a weird kind of tired where my legs wanted to go but my mind wanted to stop. based off my GPS I was holding 12:30's basically all the way to Jasper Lake. Here is butt load of pictures of the way up (with my new camera). 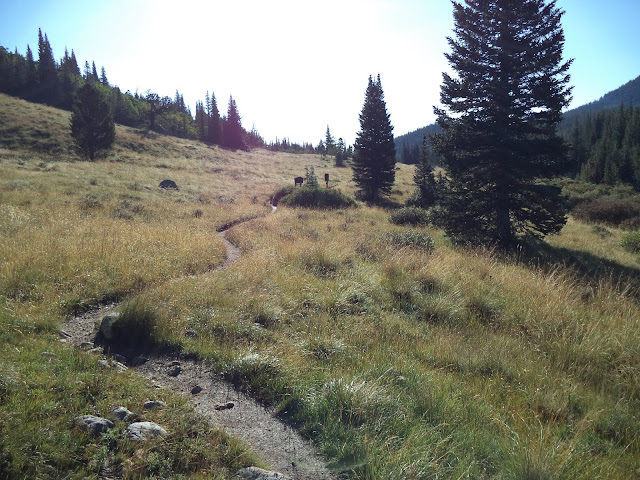 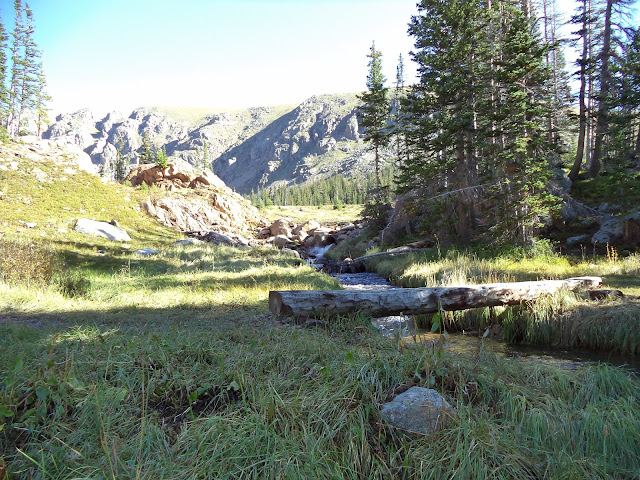 Jasper Lake still looked like a puddle with runoff all but gone at this point. Normally I take my first extended break here, but I was feeling really good so I decided to postpone till Devil's Thumb Lake for my extended break. Starting to not feel as good as I got to Devil's Thumb Lake I took a short break, ate a gel and decided I would try and push hard on the wall of ascent up to the divide. That never works, because it is really steep. 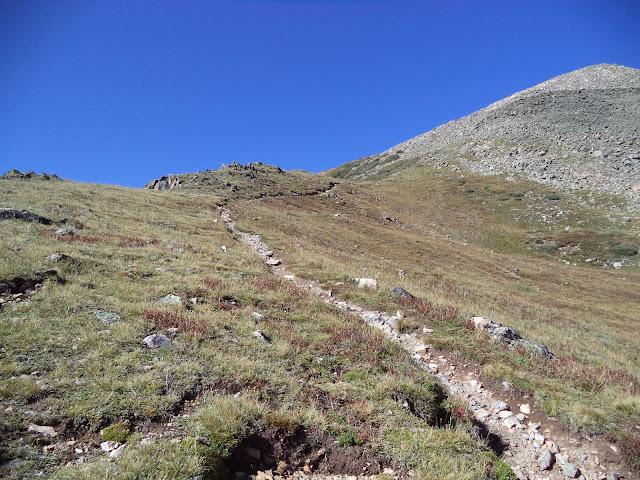 I got probably 3/4 up at a blistering 25 minute pace (Edit: Yeah right, 25 minutes its barely walking. MapMyRun can be stupid on these steeps sometimes; GarminConnect more accurately says I was at like 18 minute pace), which on that hill felt like about a 4:20 mile in my mind. Then I realized I was pretty tired so I took a little climbing excursion to a rocky thing near the trail. Sat up there for maybe 5 minutes and messed the new camera. More rando photos:

Pounded my way up to the divide up the final bit of climbing at about an hour in total time. Meaning my average at this point went from around 13 to 17 minutes per mile just from the maybe a mile of steep. The divide was totally empty except for one guy way in the distance working his way over to the mountain which I thought was Jasper. Photo spam from the divide:

I walked up a bit thinking I was ready to keep going, but an extended break sounded nice so I found a nice spot in the grass, layed down, ate some food, responded to some texts (you get full bars once you get to the top, no service everywhere else) and realized I did not bring enough water. Usually I don't need too much (I have a friend that refers to me as a cactus when it comes to my nutrition/water on the go), so I wasn't worried at this point. I climbed a small hill then descended back down to the base of what I thought was Mt. Jasper, apparently it was called Peak 12626 or something stupid like that. Regardless, it was defeatingly hard. There was no trail so I figured I go for the direct line which meant charging up 16% (Edit 2: again 16% is just not true, this was practically a climb, its steep enough to touch the ground in front of you while standing upright. Probably closer to 30%) grade. I went to my method of picking a rock, running to it, dying, being reborn and repeating. There were like 9 false summits which made it all the more difficult mentally. I was really tired at this point. I got to the top and needed water, enough that there was about 4 oz at most left for the remaining 10 miles which from the looks of where I was headed 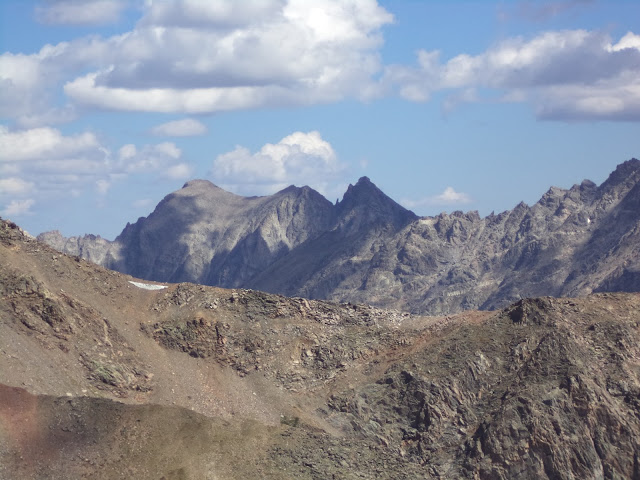 would take a really, really long time. I sat pondering for a bit and decided to again ditch the loop and make it an out and back. Less than 4 hours of sleep, a heavy distance/hills week (in which I missed 70 miles by 3 miles) probably contributed a lot, but I would say running a (some) 14ers is easier than this double summit loop. Someday I'll return more rested and prepared and give it another shot, its definitely doable. I was also craving Gatorade as the lake below looked like a pool of blue Gatorade. 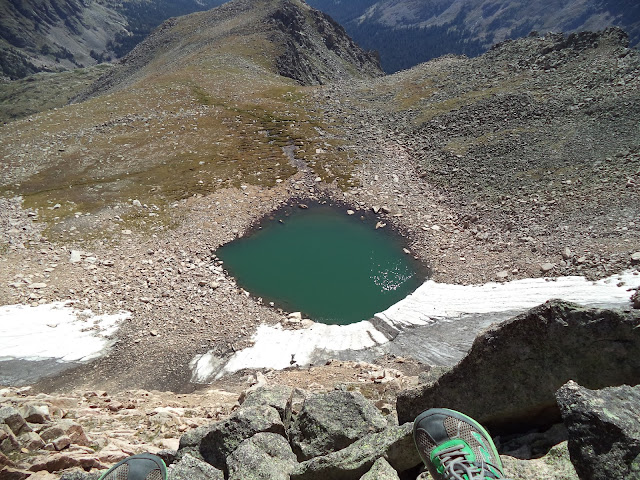 I descended the absurdly steep, trail-less, poorly named mountain which was pretty fun. The view of the thumb from this area is really cool too:

There is a decent hill back to the official Devil's Thumb Pass trail, which my legs were screaming at me not to do, so I decided to go down this talus steep thing. It was weird and slidy, kinda fun I suppose. 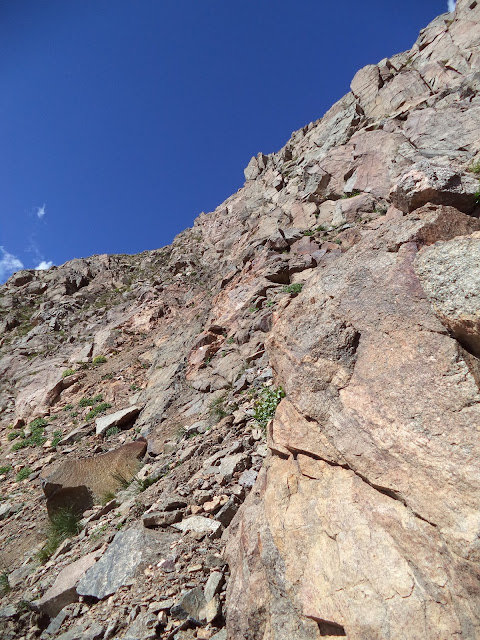 This turned out to be really stupid because it dumped me into a bushy swamp area and I had to furiously bushwhack my way back to the trail.

At this point I was getting pretty exhausted and my legs felt horrid. Especially my left quad. It was very displeased. It was 12:10 at this point and there was a bus at 1:30 I wanted to get to. I had a gel and ran very uncomfortably down. The quad continued to feel worse and worse. My pace was descent at first, staying in the mid 10's right on pace for a close call for making the bus. It hurt a ton, but I wanted to get home. For some reason when my GPS ran out of battery that was the final straw, the quad was in this weird sore/tired/cramping state that I did not approve of. I threw in the towel for running. I walked like 2 miles which felt super disgraceful for me since I always prefer to run everything I can. Still, I think it was the right decision. Realistically there was no way I would make that bus, so I hobbled along babying the leg and enjoying the scenery. I ended walking most of the way with the only other guy I saw up on the divide. We didn't know at first, but we got talking about where we went and figured it out. He had a dog that was a champ. There was definitely some high class 2 low class 3 in there which for a dog is nuts. Of course I missed the bus, but the shuttle took me to Nederland and I went to a coffee shop. It was actually pretty nice to just chill up there for a bit.
Posted by Unknown at 4:39 PM